Just outside of Hoi An, in central coastal Vietnam, we visited the UNESCO World Heritage site known as My So’n. The site consists of a small group of abandoned and partially destroyed red brick and stone Hindu temples and tombs built by the Champa civilization between the 4th and 14th centuries. The temples are dedicated to the god, Shiva, as well as a burial site for important kings and heroes.

My So’n is often described as a miniature, but much older version of the world-renown Angkor Wat in nearby Cambodia. At one time, the site had over 70 buildings, but several have not survived, including the great temple dedicated to the god Sambhubhadresvara by King Sambhuvarman in the 7th century. Sadly, it is now a pile of rubble from bombs dropped during the American War in August 1969.

Stray dogs live at the site and seem to be the silent guardians of the remains of a once important center of ancient Cham empire.

The walls still have traces of sanscrit and the bodies, at least, of many two dimensional statues in the walls of the buildings. Most of the heads were removed by French archeologists and opportunists in the early 20th century for ‘safe keeping’ and carted off to Paris, where they reside today in places like the Louvre. French officials did manage to restore and stabilize many of the buildings from further decay and prevent the nearby forest jungle from again reburying the site. 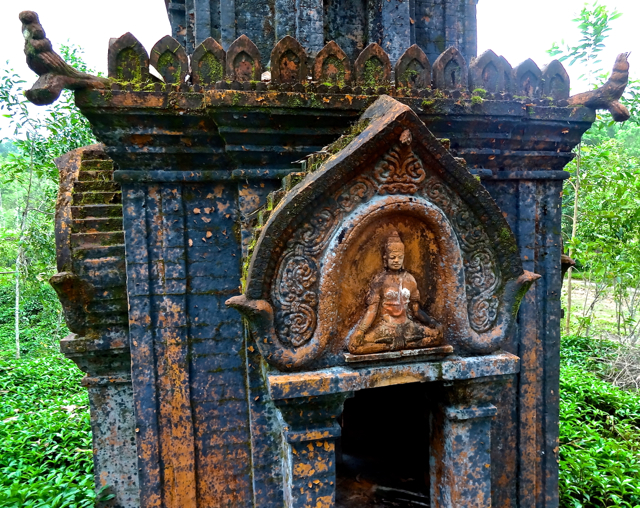 Smaller artifacts and steles are on view inside one of the larger buildings for visitors to see. Signs of restoration are evident through grants administered through groups from Germany and Poland, but much of the site looks like even a mild earthquake would bring down many of the buildings.