Growing up, I heard my grandfather, a World War II veteran, talk about the Nips, the Japs, and his lifelong dislike of all things Japanese. Even as more and more Americans began buying the better-made and more efficient Japanese cars, he stayed with Detroit chrome and steel until the end. My cousins and I would cringe to hear his raciest attitudes toward the Japanese in a war that was long over before we were around and one we didn’t fully understand. To him, it was too personal to be forgiven: The war meant he had to leave his wife and three children at home, hope for the best on a U.S. Navy submarine, and watch friends go away and not return.

I thought of those events from three decades ago as I took my own son to the very place where the story ended. In middle school, I remember seeing history textbooks with grainy images of mushroom clouds, the Enola Gay B-29 bomber that dropped “Little Boy” on the citizens of Hiroshima, and the iconic domed building that seemed to be the sole survivor of the morning of August 6, 1945. I told myself even then, I wanted to stand next to that building one day and see that place with my own eyes. I wondered then how anyone could ever live there again.

During the Japanese holiday known as Golden Week in early May, Alex and I took the famed Shinkansen or bullet train from Kyoto Station to Hiroshima. Arriving at the station, along with hundreds of other pilgrims who came to Hiroshima only for this one reason, we connected to a streetcar which dropped us just a few feet from the beautiful park that surrounds the Atomic Dome-formally known as the Hiroshima Prefectural Products Exhibition Hall. The building, also known as the Genbaku Dome, was the only structure left standing near the bomb’s hypocentre, 160 meters (2,000′) directly above the dome and just 43 seconds after being dropped by the Enola Gay some five miles in the sky. The target was 800 meters off from its original mark on the nearby Aioi Bridge. It didn’t matter because at least 70,000 people were killed instantly and another 70,000 died eventually from radiation poisoning. Hiroshima went from civilization to the stone-age in seconds.

The Children’s Peace Monument is a statue dedicated to the memory of the children who died as a result of the bombing. The statue is of a girl with outstretched arms with a folded paper crane rising above her. The statue is based on the true story of Sadako Sasaki (佐々木禎子 Sasaki Sadako?), a young girl who died from radiation from the bomb. She believed that if she folded 1,000 paper cranes she would be cured. To this day, people (mostly children) from around the world fold cranes and send them to Hiroshima where they are placed near the statue. The statue has a continuously replenished collection of folded cranes nearby.“Virtual museum”. Hiroshima Peace Memorial Museum. Retrieved 2007-12-01. 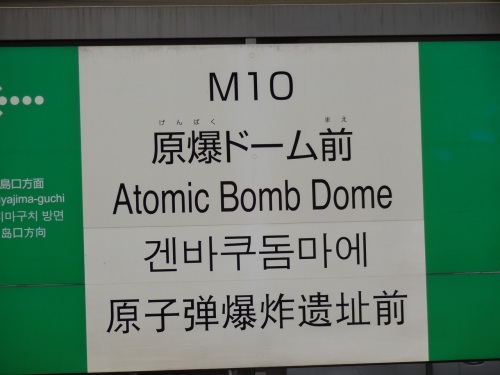 I wonder what my grandfather would think if he were alive today with his progeny visiting that haunted place; pausing to pay respects to those who died and reflecting on how it could have happened at all.

To the Greatest Generation, Hiroshima was the beginning of the end: The long dreaded war would have to end and the United States would not be forced into invading Japan and to the inevitable huge loss of life on both sides. I am not a revisionist and I can’t say for sure what would have happened had the United States not dropped the bomb, but I hope the lessons learned from that day in August will prevent the need for another sad memorial for my great-grandson to visit with his father.