Admittedly, Alex and I have done little in the way of sightseeing in the place we have spent the most time for the past year. Qingdao, much-loved by the average Chinese tourist who flock here by the millions each Spring through Fall, has often left me lacking. Perhaps it’s the heaps of trash strewn on the beaches or the toxic clouds that frequently hang over the coast from the coal-burning power plants and factories farther inland. I have realized too that I need to see more of it before we leave and see more clearly what the Chinese find so endearing here.

On many occasions, however, I too have been dazzled by the beauty and abundance of beautiful flowering plants(in preparation for the 2014 Agriculture Expo, Qingdao has over-planted everything), trees, and clear LaoShan mountain views when the weather and smog permits. Last weekend was just such a weekend and Alex and I were able to enjoy the best of Qingdao in our waning weeks in China. The temperature was a pleasant 25c., a stiff breeze meant kites would be an easy proposition, and the sky a perfect cobalt blue after two weeks of ‘June Gloom’made it a perfect day to be a tourist in your own town. 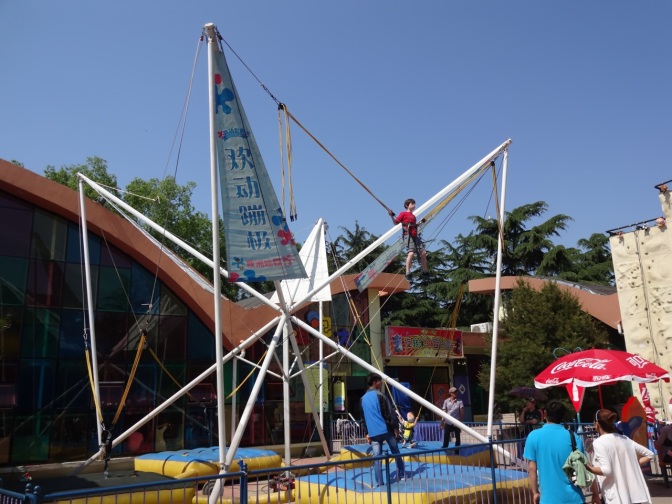 Zhongshang Park is Qingdao’s Central Park of sorts and features an old-fashioned Coney Island style amusement park along the edge of a much larger leafy park with a zoo, lakes, gardens and the largest number of cherry trees outside of Japan. After a spin in the Swinging Chairs, Alex tried his luck at a couple of arcade games (no luck), jumped on the giant rubber band bungee ride, rode the giant swinging pirate ship, and climbed up one of the tallest of the climbing walls (luck!) and won himself a giant bunny-faced pillow. He designated the pillow as his official in-flight sleeping pillow on the trip back to America in a few weeks.

Near the not so cleverly-named Beach #1, we bought a kite and string from a man who not only set it up for us but had it 20 meters in the sky before turning over the reins to Alex. He was impressed, we think, since Alex both could speak Chinese and got him to lower his price from 32 rmb to 20 (less than $4). The kite, not only looked like a real hawk, actually flew like one we discovered and seemed poised at times to attack other nearby kites. 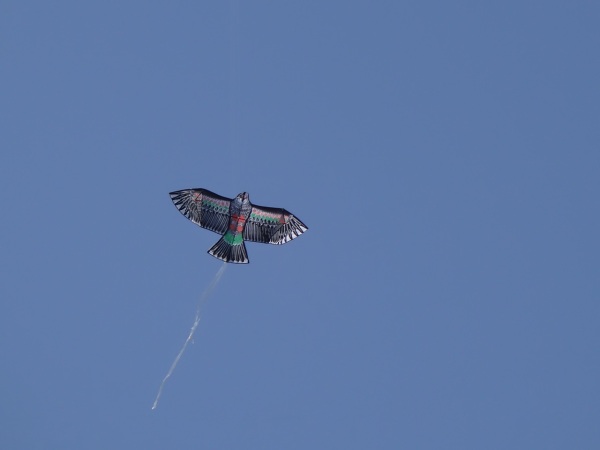