Seventeen years before the Great War in 1914, Imperial Germany began setting up a colony in China. The Boxer Rebellion in China led to violence and conflict. Two Catholic missionaries were murdered in the Shandong Provence and Germany seized its opportunity to secure a valuable piece of real estate on the Yellow Sea in Qingdao. The growing imperialism that was spreading throughout Europe in the build up to the first world war was now permeating Asia as well. The British were established already in Hong Kong and Shanghai and the Germans were anxious to control the waters off nearby Korea and Japan. Qingdao had a perfect and natural deep water port and little in the way of resistance.

In creating the colony of Qingdao, at that point a sleepy fishing village of a few thousand local inhabitants, the Germans introduced miraculous new technology and improvements to the area. Within a few years, Qingdao featured hundreds of new and modern buildings with electricity, plumbing, parks, piers, schools, paved roads and sewers.

The area boasted the highest percentage of educated local populace in all of China. As Germans, it was not long before the Tsingato Brewing Company established a Bavarian-style local beer to supply the growing immigrant population. Tsingato, the most popular and most exported of Chinese beers, is still based in Qingdao. 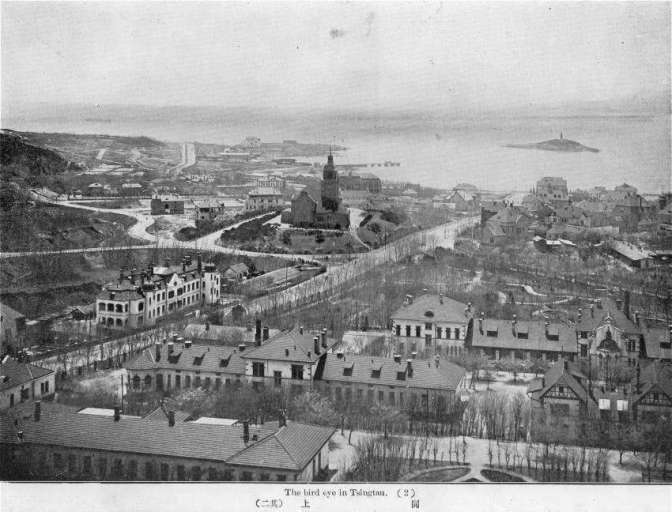 Last week, I took a group of middle school students for a closer look at the best examples of what’s left from the Siege of Qingdao. We started in Old Town-near the center of what was once German Tsingato. Most of the buildings from this era remain if not repurposed for more modern Chinese needs. One small museum attempts to preserve some of the events in Qingdao that are a small part in the history of the first World War.

When the first World War started in August of 1914, the British has already begun to form an alliance with Japan as well as operate a small port in Weihaiwei, also in Shandong Provence.

While the British considered the Germans to be a threat, the Japanese looked at Qingdao as an opportunity to gain access to China and a base to control more of Asia. In response, the Germans developed an elaborate series of hilltop forts, bunkers, look-outs, and gun placements and mined the harbor to prevent a naval attack.

Interestingly, the first air combat in history occurred in the same area we have been living for the past year: Shilaroan, just north of Qingdao and along the coast at the base of the Laoshan Mountains. The Japanese carrier Wakamiya, whose Farman seaplanes became the first in the world to successfully attack land and sea targets. These planes would also take part in another military first: the first night-time bombing mission. Airplanes would later have an even greater impact in the war back in Europe.

Despite the hilltop advantage, the German army asked for terms after only 8 days of defending Qingdao. The combined forces of Japan and Britain overwhelmed the Germans and took them prisoner for the duration of the war. The Kaiser is quoted as saying “… it would shame me more to surrender Tsingtao to the Japanese than Berlin to the Russians.”