Many moons ago I dated an accountant. She was incredibly smart and attractive and thought my every word was pure comedy genius. Our relationship, however, was eventually doomed by her lack of wanderlust. I discovered a few months into dating that our need for adventure and exploration were on two divergent paths. Perhaps some readers will object to my dwelling on her occupation as having some connection to her spiritless nature. I don’t doubt that there are some incredibly adventurous, even insanely wild accountants out there, but she happened not to be one of them.

The first time I visited her house should have alerted me to this dilemma when I discovered the large professionally matted and framed photograph hanging prominently over the fireplace. It was a shot from a few years earlier taken of her and some friends whitewater rafting somewhere in North Carolina. 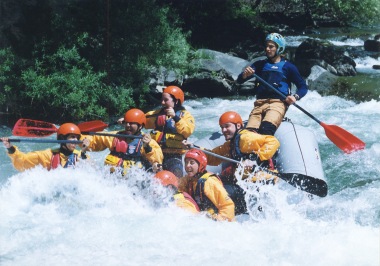 The photo was one taken of each boat by the rafting company as they bobbed by in the hope of selling you a copy later before the euphoria of having survived the trip evaporated. When I asked her about it, she spoke about it as if describing a UFO abduction or the time she happened to sneak into the White House to meet the First Family. She clearly was affected by the experience and considered it a major milestone. 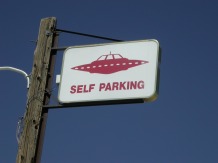 There was no ignoring this monument to a significant adventure in her life, so lovingly featured above her hearth. Having never rafted before, I was impressed by her story and eagerly pressed her for more.

If there had been more, anything really, beyond that one rafting trip I would have been hopeful for us planning our own adventures and a future together. She was, after all the daughter of a history museum director, and one who had many opportunities to travel abroad, to literally hold history in her hands if she wished, and to take advantage of her lucky connection, but she didn’t. She wasn’t particularly interested in artifacts, relics, and visiting the great ruins of past civilizations. She could have explored temples of doom or gone on a last crusade, but she found solace in numbers and the thrill of the audit over lost treasure or solving mysterious cyphers. 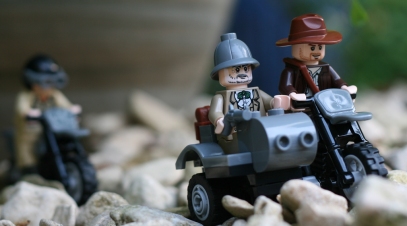 She seemed content to retell those forty insane minutes on the French Broad River five summers earlier. Her bucket list, it appeared, was rather shallow and want of wear.

Perhaps if experiences over material things were not so important to me, I would have been more forgiving and I would have looked beyond the material wealth over the experiential gems she accumulated. She drove a new and pricy car, her condo was beautifully decorated, and she liked to treat herself to new clothes and regular spa treatments. It was her money and she could well afford it, so why not? Conversely, I often shopped at Goodwill, drove an old car, and saved all year for the next opportunity to travel. The fact that I was passionate about different things didn’t mean I was right and she was wrong, but it did not fan the flames of our relationship any either. She found her happiness with stuff, and I found mine through exploring whatever was out there to see. If I had only been a better consumer, and she more curious, we might have had something.

An iPhone 4, a fat tubed TV set, or a ten year old Honda Civic are all good reminders that all that glitters eventually fades, and what made us so happy for a time has a planned obsolescence we did not see coming. People who design stuff for us planned it that way. The same is not true for experiences we collect throughout life, namely traveling, visiting galleries and museums, enjoying lectures, attending concerts, and taking classes or workshops that interest us. Those experiences, unlike the latest electronic gadget, is unique to me and the things I saw and did and not at all easy to duplicate by anyone else. Even those able to spend thousands more than me or you on a trip to Paris or Rome by staying in five star hotels and eating at posh restaurants, don’t arguably enjoy climbing the Eiffel Tower or exploring the Colosseum anymore than the rest of us.

The beauty of the Grand Canyon or the Galapagos is still open to everyone who can get there. In fact, visiting places of great beauty and history seemingly blur social classes for at least a brief time as students, tourists, seekers, the elite, and everyone in between together soak in the Louvre, Trafalgar Square, or Big Sur as fellow humans. Although you may covet your friend’s latest cell phone, she can’t easily compare that little luxury to taking a train ride across the Alps, listening to your favorite band live, or taking care of rescued elephants in Thailand like my son and I did two years ago. 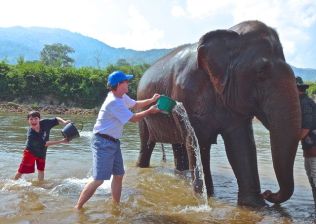 For about the price of a new X-Box and a couple of games, we were able to travel across Thailand and Laos for a week visiting World Heritage sites. The value of that week is immeasurable as the years go by replaced by the more mundane days of school and work. I feel confident I made the right decision for him, although I will wait a few more years to ask him that question. The experiences we shared that week and many others like it will sustain us both forever, unlike the latest gaming systems or buying a new car.

It seems counterintuitive to think that material objects, things that could make our lives infinitely easier or more comfortable and for longer periods of time, more often makes us less happy over time than our experiences. Psychologists have suggested that although buying things make consumers immediately happy, we quickly become adapted to the item and unconsciously start a new search for that next shiny bauble. Even the bad experiences everyone is bound to come across at some point can leave us with a feeling of success over adversity or at least provide us a great cocktail party story to share, whereas a drawer full of old cellphones and MP3 players only leaves us feeling guilty and wasteful. Simply put, we vote with our dollars everyday, and I have vowed to voted for less stuff and more memories.

I am certain the road to happiness doesn’t involve the need for a storage unit or a weekly trip to the mall. Less has become more important to us. 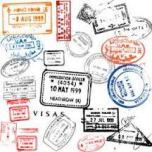 The things I have accumulated that hold value for me are my thousands of photos, concert ticket stubs, my  eclectic music collection, inexpensive souvenirs and the dozen colorful visa stamps on my passport. All are good reminders that the best stuff in our life is really the experiences you share, wherever and whatever they may be with the people you love.

3 thoughts on “Stuffed: Why things make us less happy than experiences”